About Mathematics and its teaching – by Chris Binge 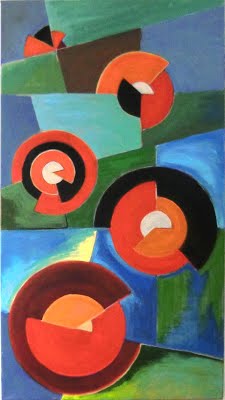 A Bouquet for Gauss by Suman Vaze

I was recently put in front of a class who had been doing some work on Complex Number. They knew about real and imaginary parts, and had done some algebra as well as drawing representations on the complex plane. They had heard of the terms modulus and argument, but had not really done anything with them. I began the lesson by putting Suman Vaze’s painting on the screen.

I left the class for a while to get something i had forgotten, and asked them to study the painting and find the Maths in it. I suggested they concentrate on the first four flowers.

After leaving them for a while, we started to discuss what they had noticed. Various comments came in, and the built on the wisdom of each other. We reached rotation, angles, different ways of arriving at a half turn, adding four equal angles together to do this. We even discussed whether these four solutions were the only ones, and decided that they were if we accepted angles being modulo 2π being equal and only allowed positive rotation.

I then asked them to express this in the language of complex numbers, and we eventually arrived a the fourth roots of -1, which was Gauss PhD thesis. Once they had the feeling of rotation and multiplication, their grasp of modulus and argument was intuitive, and the statement and proof of de Moivre was obvious.